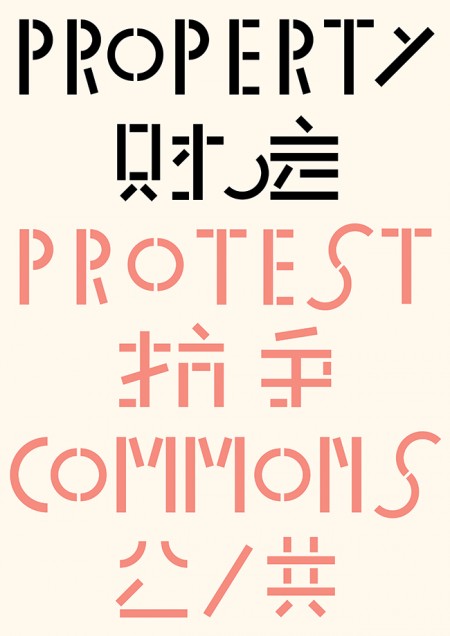 During a one-year 2014/15 residency I was able to develop new ways of understanding Asia Art Archive as an organisation, directly engaging with individuals, methods and systems responsible for activating and representing its holdings. Working with the team and researchers based at the AAA as well as involving my collaborator, Taipei based curator Esther Lu and director of TCAC, I begun the process of research by focusing my enquiries around the themes of property, protest and commons.  My research begun with trying to gain a greater understanding the effects of land speculation and property development have on public culture in HK. Property is never some physical thing nor a person’s right of action, nor the social regime recognizing those rights, but some combination of those joined together. Since property touches all social relations, how we imagine property is how we imagine ourselves. I have closely investigated a particular case of land reclamation, through the documents at AAA as they relate to Oil Street Artist Village and its eviction due to land sales. Followed by research conducted at the private archives of Winston Chu, a lawyer whose 20-year legal battle resulted in halting further reclamation in HK. My conversations with Winston Chu are documented in audio recordings. While painfully aware of the dominance of the art market  I was interested in attending to the work of an earlier period between 1976 and 2005 when Chinese artists, developed a set of tactics by way of organising ephemeral actions and exhibitions in locations not designated for art allowing for a more critical language to emerge. Their belief in art’s power was the engine of these self-organised initiatives. This particular research was based on a book by Shanghai based curator Biljana Ciric and resulted in a series of photographs and small publication guide entitled Shanghai Exhibition Histories Distributed. I traced the original locations, many of which no longer exist, as the city has since embraced corporate enterprises and their new owners. What has been left out in the formation of Chinese contemporary art can be seen in its genius loci.(full text and images here)

In September 2014 I travelled to Seoul for Undoing Property? presentation at The Book Society with participation of Antariksa (Kunci) and Binna Choi (Casco). At the same time visiting two architectural practices: Jinza (http://jinzaspace.com) has been doing research into the vernacular architecture to affirm ways of living that fail to adapt “modernist” principle while employing its own improvisational tactics. Jungim Architecture Cultural Foundation, (http://junglimfoundation.org) focuses on critical discourse around the commons, and living in common. In November, together with the AAA colleagues Hammad Nasar and Elaine Lin I travelled to Yangon to help set up the Mobile Library project, giving a short presentation at the National University of Art and Culture. In January 2015 I travelled to central Taiwan to visit Atelier-3 founded by the Taiwanese architect, Hsieh Ying-chun, who moved his studio to rural Taiwan in the wake of 1999 earthquake. Their low-key collaborative approach to architecture uses technology in a holistic way, paying attention to the preservation of environmental and cultural heritage as well as creating a sense of community. The buildings, built collectively, become guarantees for the banks allowing communities in both China and Taiwan to join a mainstream economic system that was previously inaccessible to them. In September of 2015, following the TCAC workshop in Taipei I travelled to Tainan, where I had meetings with artists and curators involved in the alternative art scene, such as Fotoaura Institute of Photography at Art Square Tainan I recorded a conversation with Nicole Lai & Yang Chia Hsuan of Howl Space discussing the ongoing artists’ intervention programme in Tainan.

The most important part of my residency was activated through planning three public workshops organised together with the TCAC’s curator Esther Lu, and Ingrid Chu Public Programme curator at AAA. These were focusing on the complex relationships between property, protest and commons inside the alternative economies of art.  We have invited 22 participants who were drawn from SE Asia and beyond. They discussed art practices and offered reflections on the role of social movements in their respective contexts as well as presenting personal and institutional tactics on how to remain sovereign from the pressures brought upon by a relentless marketization of symbolic and social values in public life.